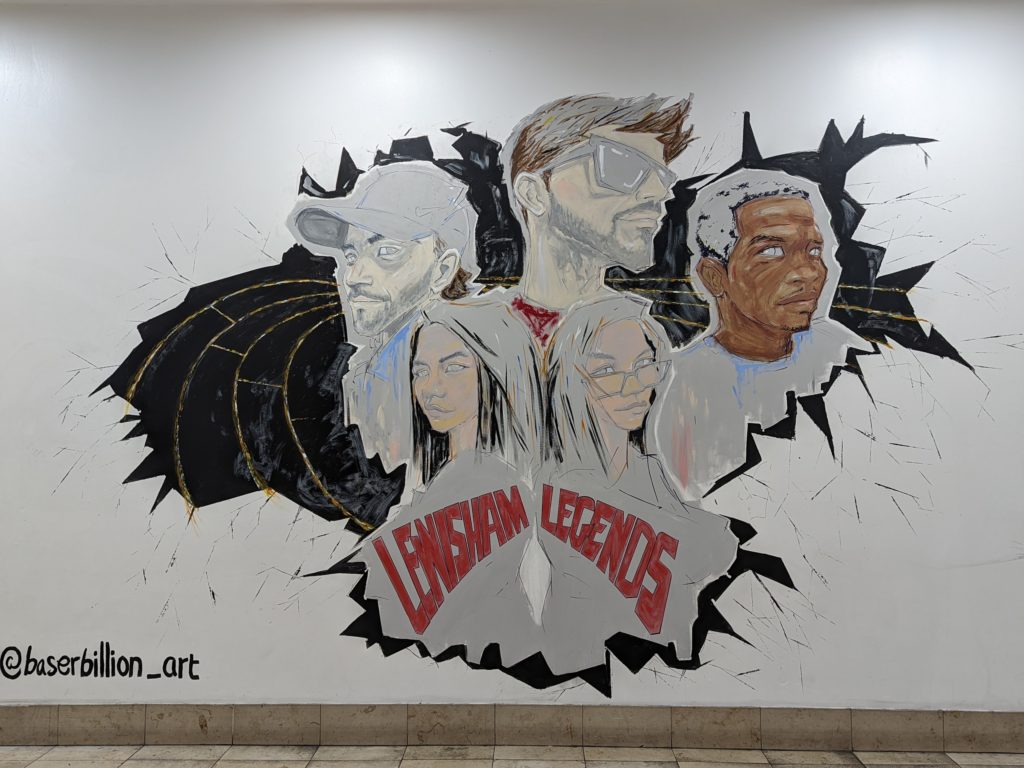 S-Factor Athletics Academy is a dynamic and inclusive athletics club based in Ladywell Arena. Coach Adam and his team received countless nominations for creating a welcoming environment where young people of varying abilities can come together to train or compete.

“I have delivered this mural to depict five volunteers from the S FACTOR ACADEMY.  They provide athletics training to disabled children in the Borough on a voluntary basis.

The process I used involves an initial sketch taken from photos I took of each featured person. These sketches were then scanned and arranged into a suitable composition on an iPad.  This image was then embellished and taken to the desired finished image. This is then projected onto the wall and a line-out of the image is created. Once the line-out is on the wall, I proceed to grey tone the faces, then skin tone over. The rest of the image was straightforward in that I blacked out the background and added the racing track.” – Damian Simon

Damian is a visual artist specialising in large-scale murals and artwork. His mediums of choice are spray paint and acrylic when delivering a mural.

Damian enjoys running school art workshops in the community and bringing art to inner-city children and allowing them to explore their creative powers.  His previous commissions include for the NHS to deliver murals in their local clinics.

He is privileged to sit on the Culture and Diversity board for Lewisham in its year as London Borough of Culture 2022, and Creative Enterprise Zone.

Find out more about the artist: Damian Simon

Lewisham has a proud history of standing up for equality. In January, we asked you to nominate your Lewisham Legends – the people in our community now whose incredible contributions to the borough you wanted to see celebrated through giant public artworks.