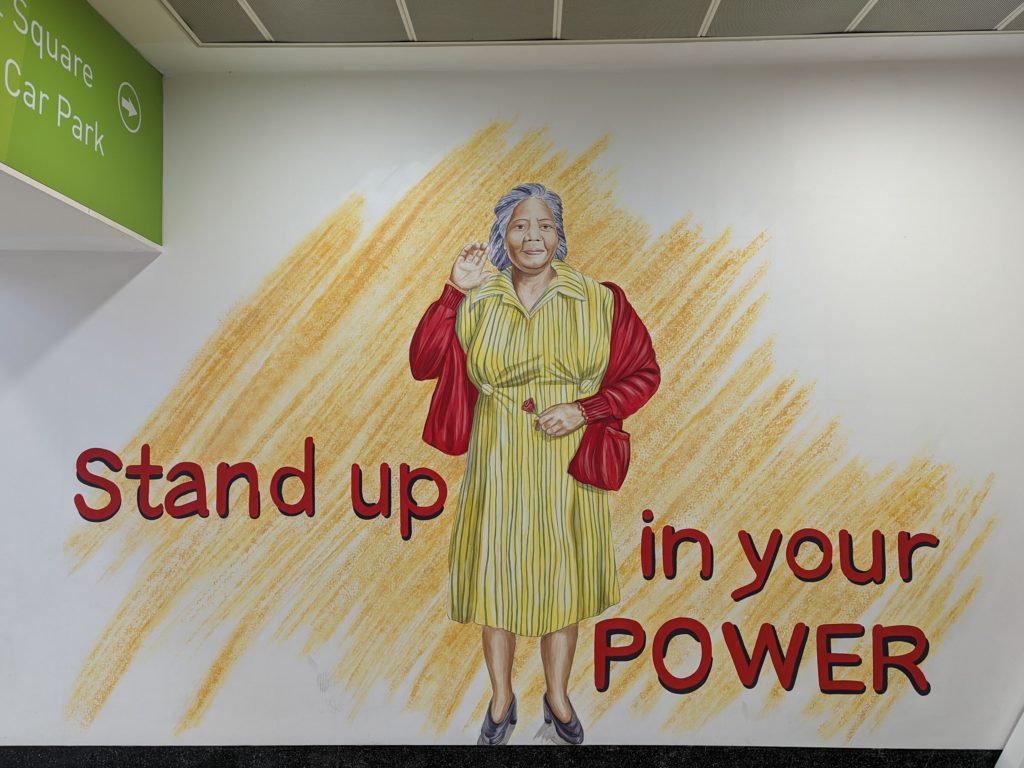 Lewisham Shopping Centre, West Mall (next to Sainsbury’s, opposite Wilko)

Sybil Phoenix MBE, OBE – and former Lewisham Mayoress – began her long history of social activism after moving with her husband Joe to Lewisham in 1963. She has helped transform thousands of lives and was the first Black woman in the UK to be awarded an MBE for her incredible efforts. Among her many achievements, she started the first purpose-built Black youth club – now known as Moonshot Community Centre – in the UK.

“I would have loved to paint Sybil Phoenix or photograph her in person but as she is 95, she is shielding at the moment so the Lewisham Legends team put me in touch with her son Woodrow Phoenix and he very kindly sent me some lovely photos of Sybil. I already knew a bit about her due to her fantastic work in Lewisham, particularly the Marsha Phoenix foundation but was blown away researching about her life and all the positive action she has taken in initiating improvement and change within and for the community.

Taking an image of Sybil standing in her garden in the sunshine, the words ‘Stand up in your Power’ came to mind. I then worked this text around her form and thought about how the colours and shapes would work in the space.

Painting it I used a grid to scale up the design and mostly worked with brushes and textured rollers.

It was such an honour to paint this portrait and I hope her legacy inspires many more generations to stand up in their power and initiate positive action both locally and globally.” – Boudicca Collins

Boudicca is a fine artist and scenic painter from South London. She studied at The Slade for a BA in painting and then went on to become a scenic painter for The Royal Opera House as well as working for film, television and events.

She enjoys the challenge of painting on a large scale and responding to and interacting with the local community. Her love of the natural world is a strong inspiration in her work along with a fascination with patterns and the relationship between the macro and microcosm. Vibrant colours and the influence of Tropicalia play a key role in her paintings and reflect her Anglo-Indian heritage.

Growing up in London she has experienced the uplifting effects of murals and street art and understands the positive impact that art can have within communities and the city.

Find out more about the artist: Boudicca Collins

Lewisham has a proud history of standing up for equality. In January, we asked you to nominate your Lewisham Legends – the people in our community now whose incredible contributions to the borough you wanted to see celebrated through giant public artworks.