Taking theatre to care homes across our borough

Artist Christopher Green has been performing to care home residents in Lewisham this October. Here they give you an insight into the project and the tour.

The Home has had many incarnations since I first had the idea about 6 years ago.  It’s been a 48 Hour durational experiential show, a ten-minute intimate theatre piece, an internationally produced digital gaming experience, and The Home Roadshow has toured London, Yorkshire and the North East of the UK.  Now The Roadshow is touring extensively in Lewisham as part of London Borough of Culture 2022.

It’s starting to feel a bit like a live art version of a streaming series.  We are in at least season 6.  One of the many joys of the sprawling, seemingly self-propagating nature of the project, is that lots of actors have been part of The Home.  Because the heart of the offer of this idea is the world building of The Home Organisation, there are multiple jobs in this large-scale fake company.  So, we have had many managers, care workers, domestic services operatives, activity co-ordinators and residents.  I sometimes get the feeling that we will soon be able to number working actors who haven’t had a role in The Home.  It will be quicker than listing those that have.

The Home Roadshow is a gloriously silly 30-minute entertainment for care home residents, their families and visitors, and, crucially, the staff of the homes.  It deals with very complex issues about surviving the pandemic, chronically low recruitment and retention of staff, as well as the nuances of being vulnerable.  The comedy is broad-strokes; there is booing, cheering, sing-a-longs, prizes, but more than any of that, there’s a deep-rooted sense that though this fictional company is cynical, capitalist and uncaring, the theatrical company and artists really do care.

It’s an honour to go into care homes and perform.

It’s an honour to go into care homes and listen.

Leaving a home in Blackheath the other day, we reflected how few people walking down the local high street ever get to go into a care home.  They are on the front line of living, with all life’s hardships, and all life’s joys.  It’s such a shame that only a tiny percentage of us ever go and visit.  We are delighted that with this tour for London Borough of Culture, we are able to perform for, and listen to, these vitally important members of our communities.

Photos from a Home Roadshow performance 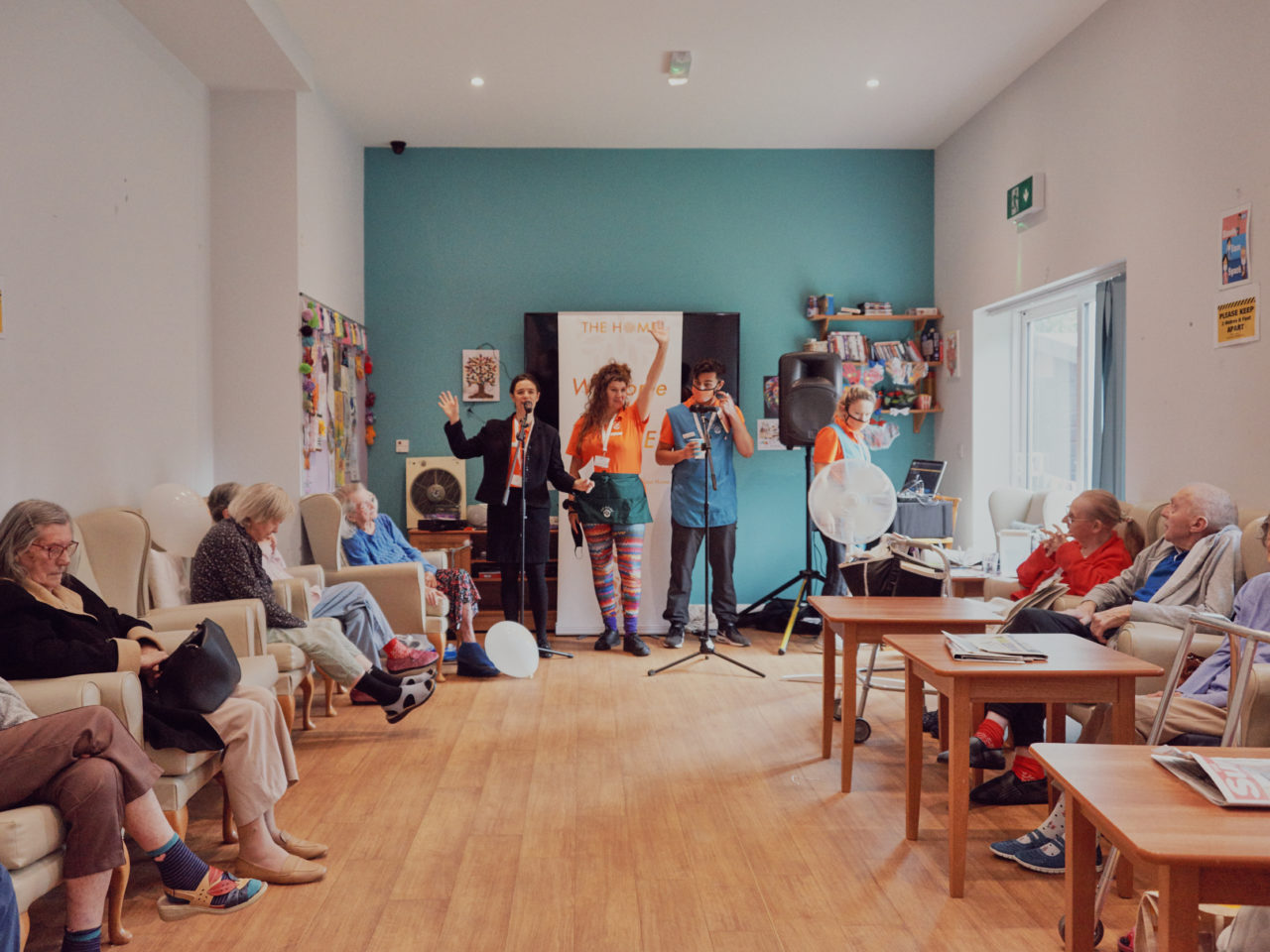 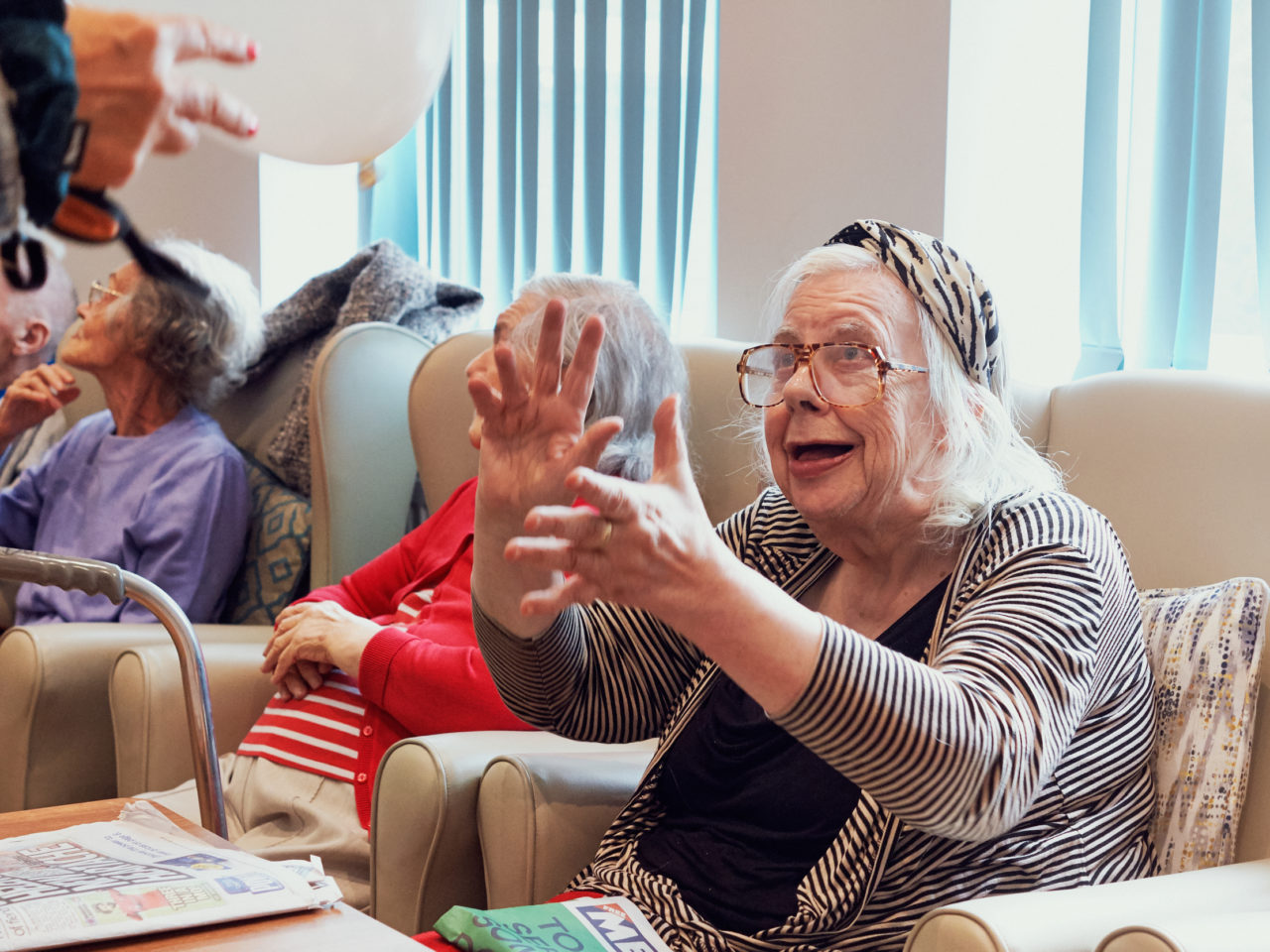 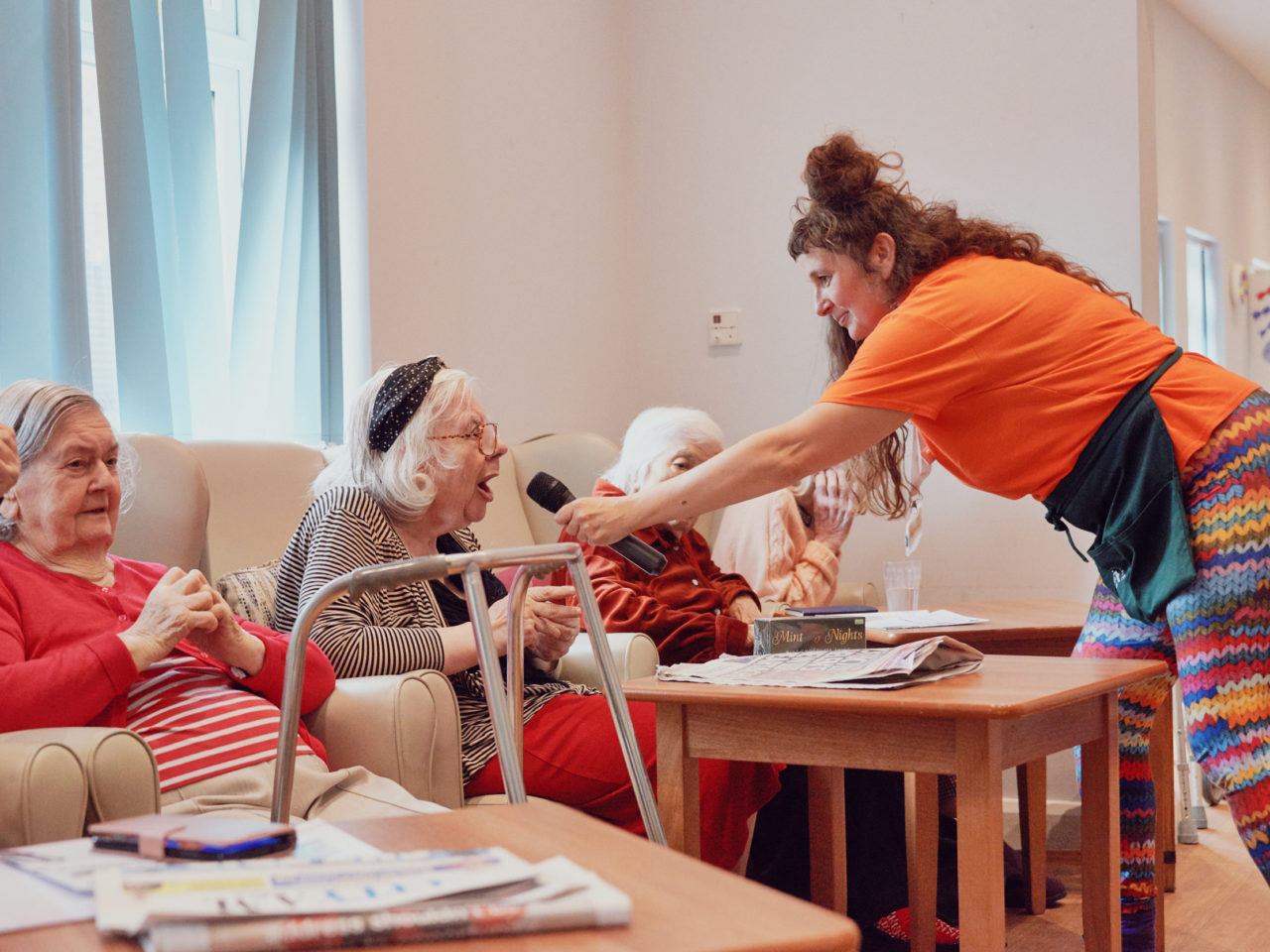 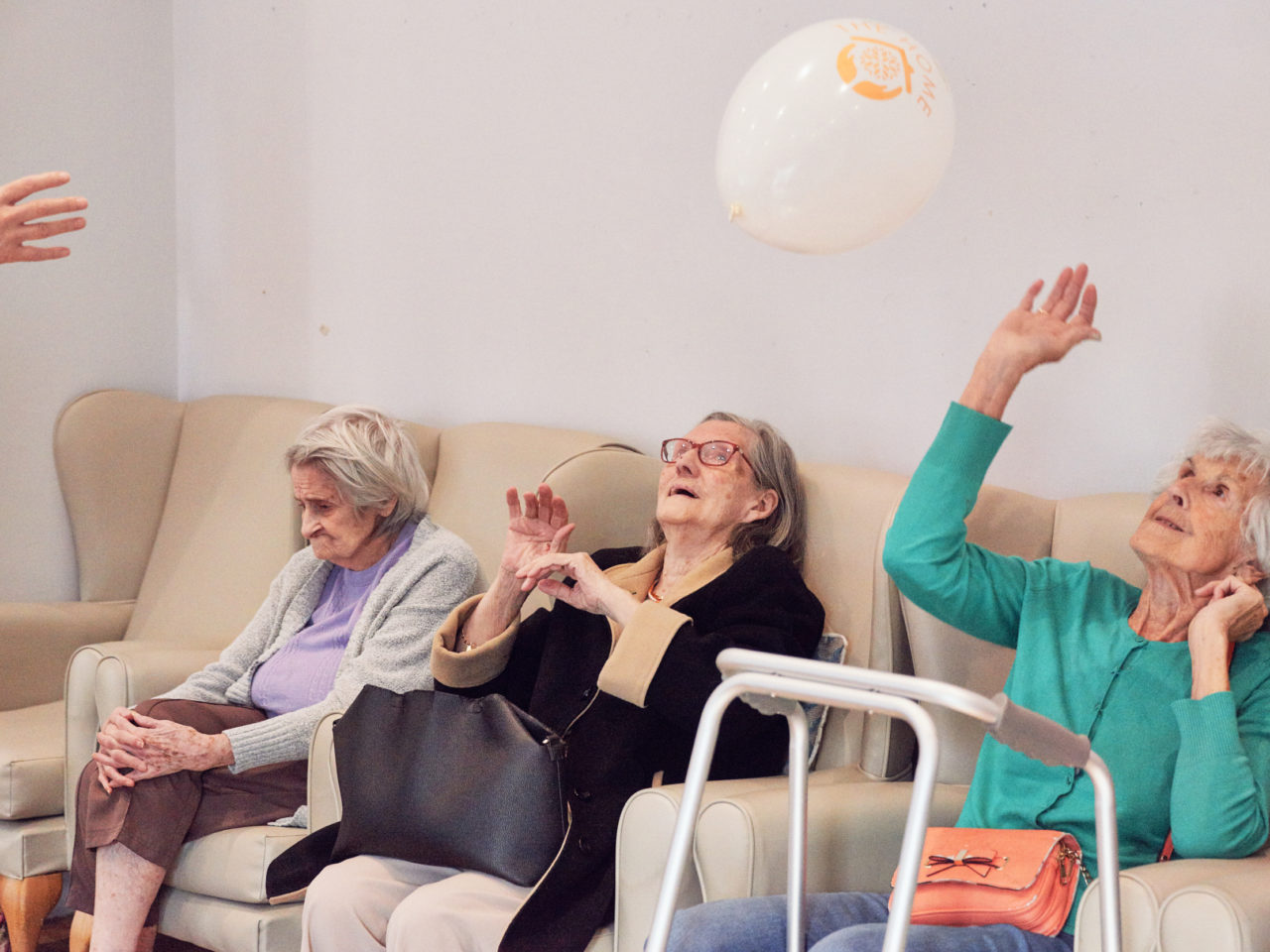 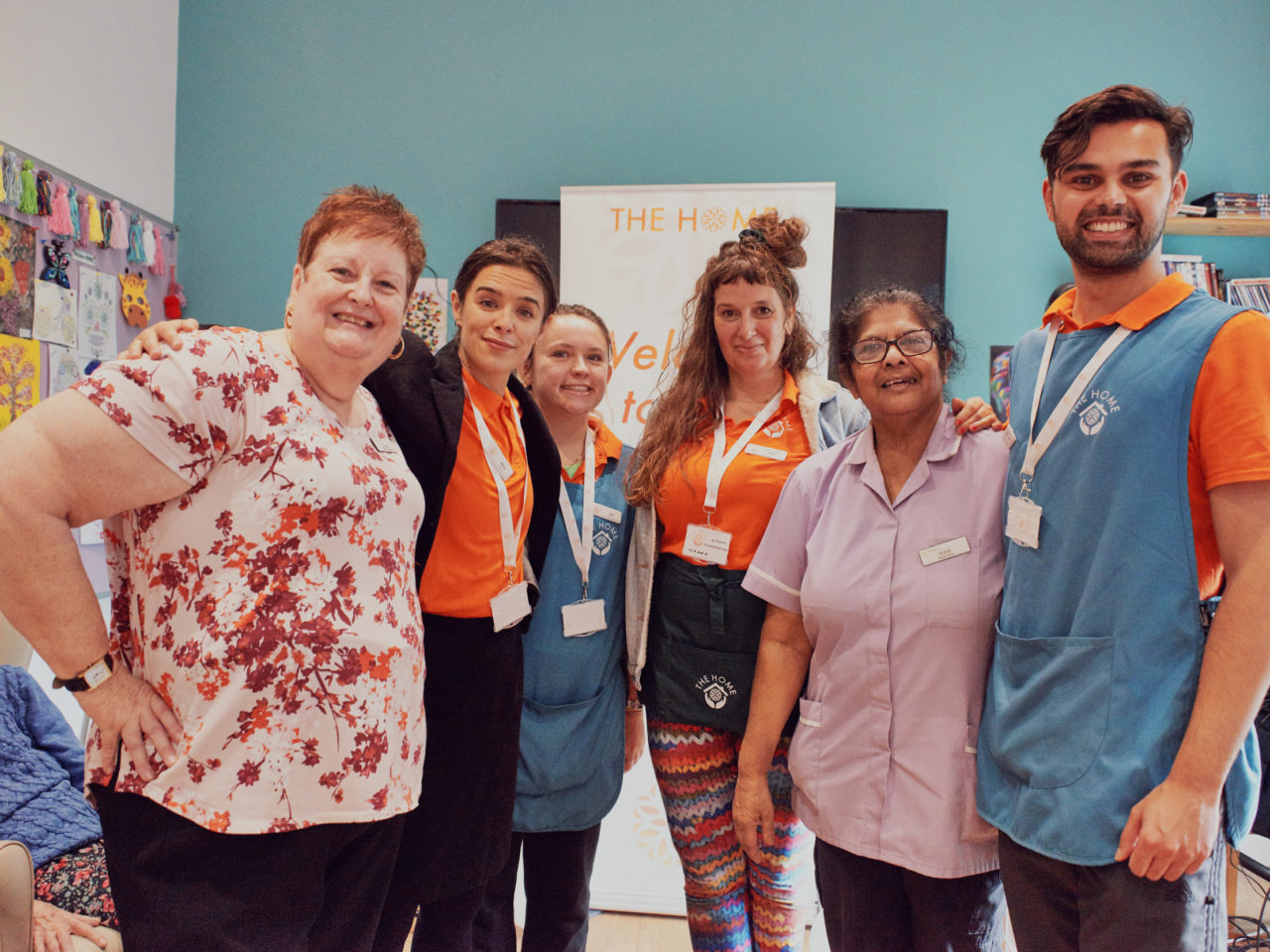 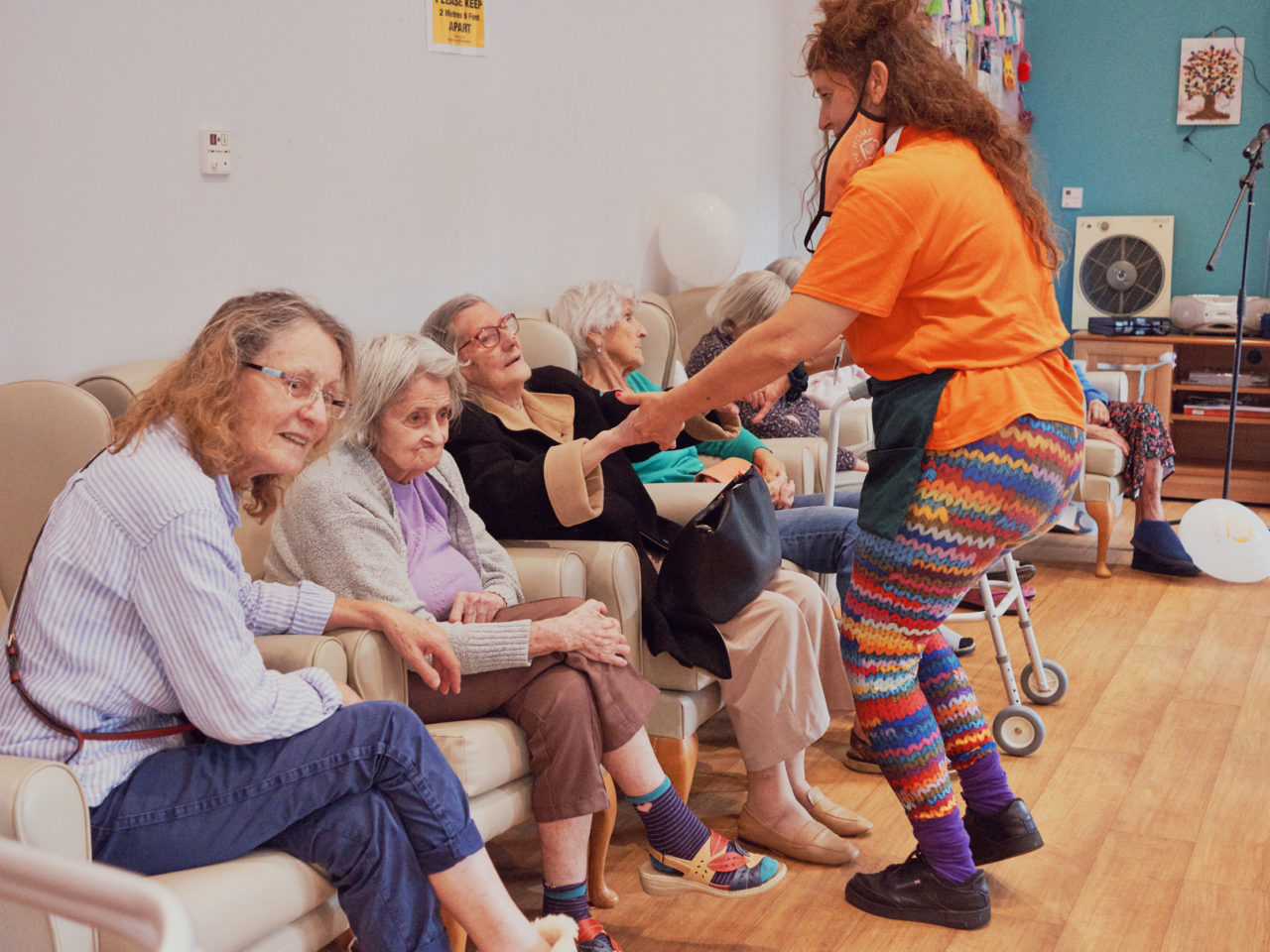 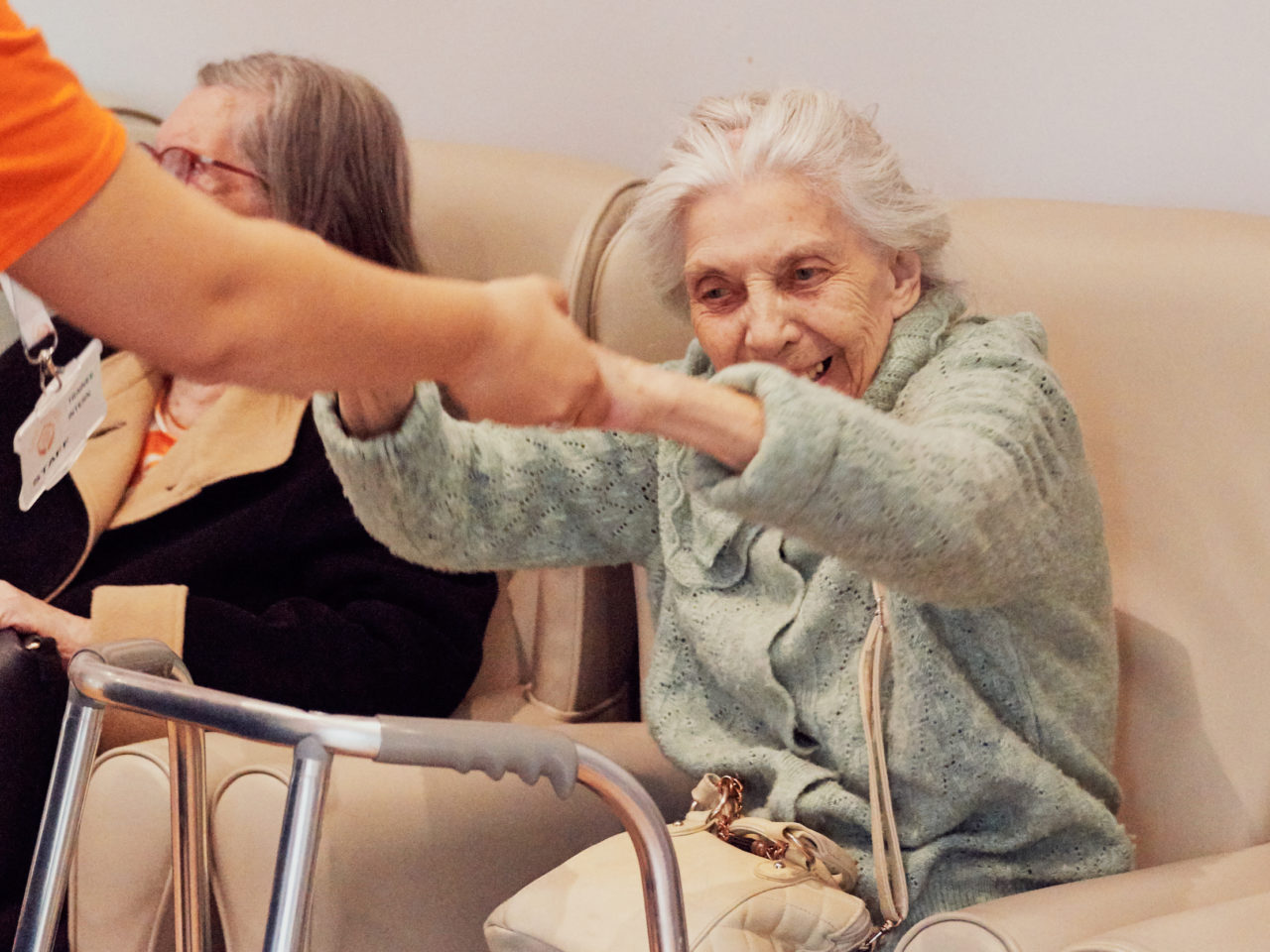 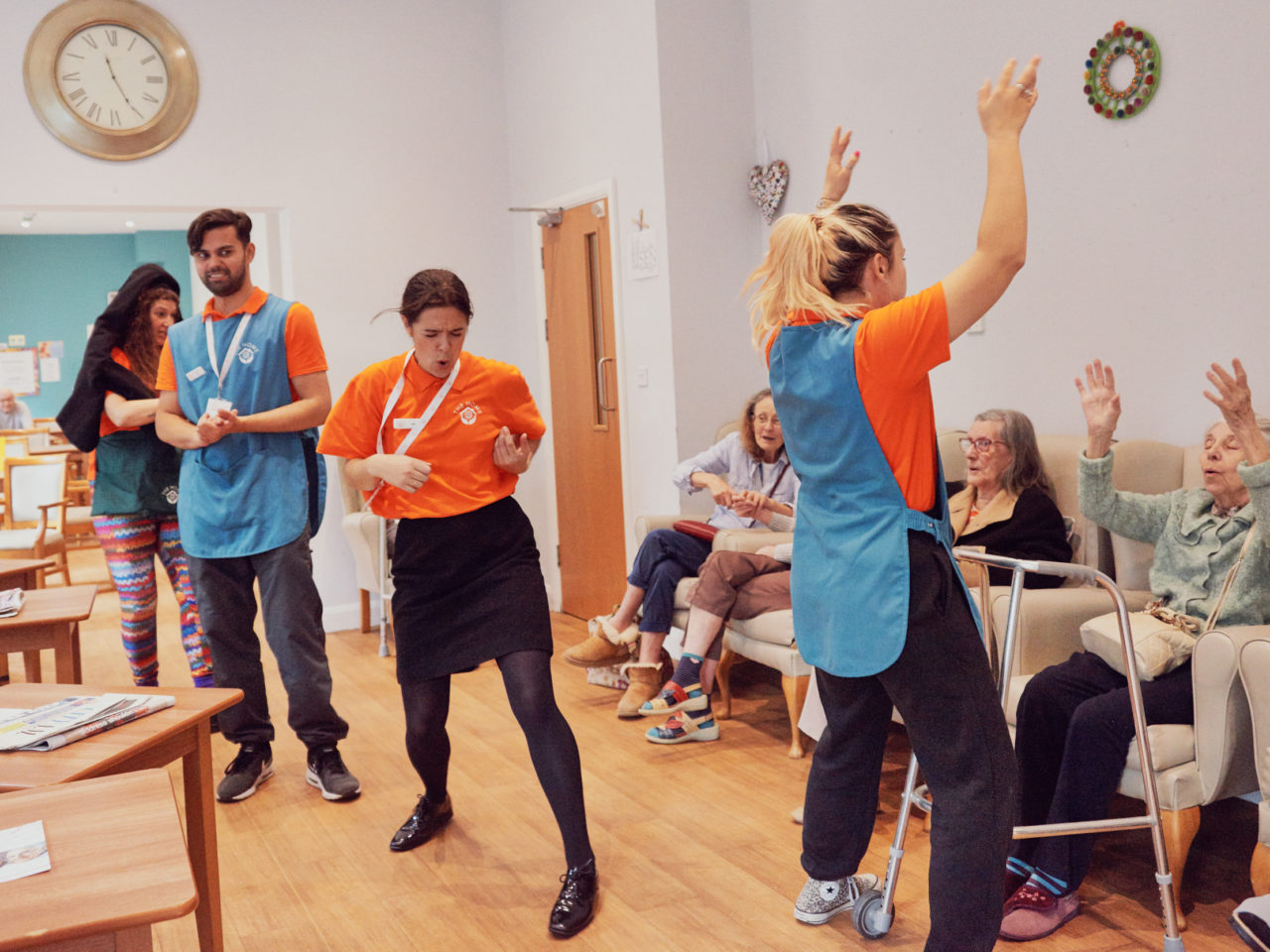 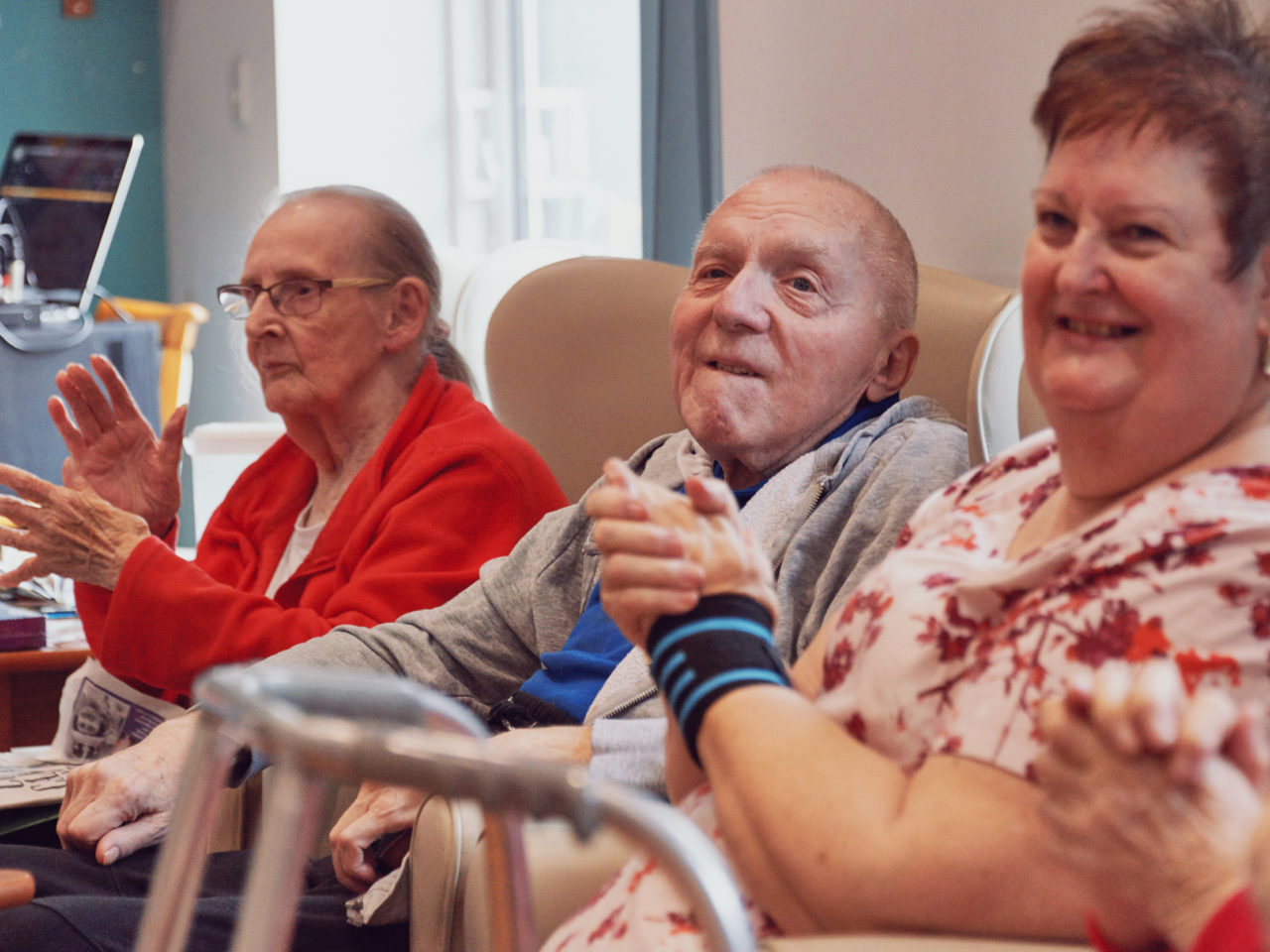 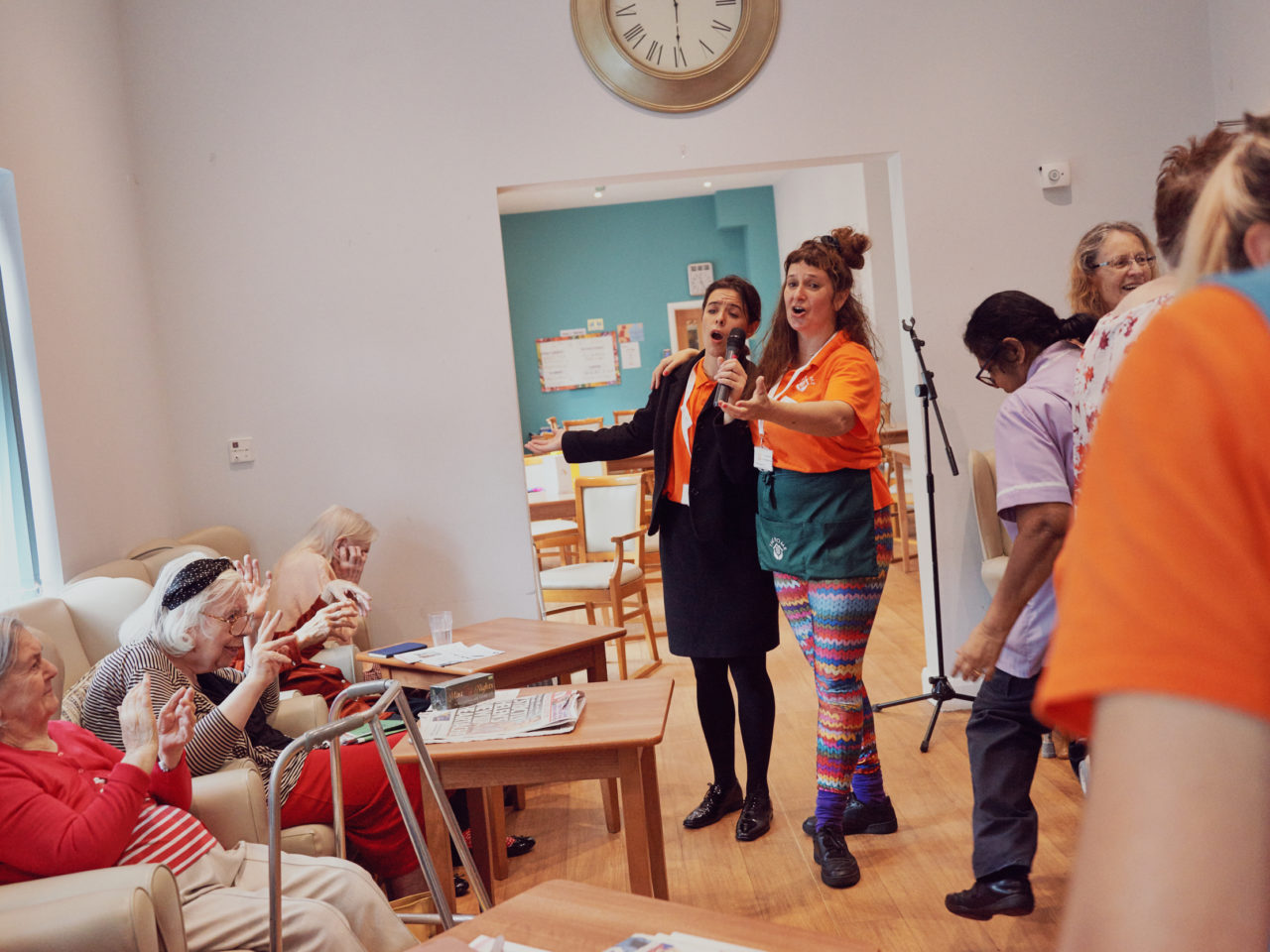 Christopher Green (also known professionally as Kit Green) is a writer and performer across performance, music, broadcast and live art. They are non-binary. Current projects include: FeelPlay, an Outdoor Arts commission for Summer 2022; What Will Survive of Us? with Entelechy Arts; and Always Here, a song cycle about being gender non-conforming written in collaboration with Kathryn Williams.

Christopher performs as characters such as country music singer Tina C, rapping pensioner Ida Barr and cultural critic Jedd O’Sullivan amongst many others. They regularly write for BBC Radio 4. Their most recent drama was How Success Ruined Me, a two-hander with entertainment legend Roy Hudd, about performance and addiction.

Christopher is an Artistic Associate of Wilton’s Music Hall, Duckie, Entelechy Theatre Company and Creative Cowboy Films (Australia). Prior to making their own performance work, they worked in television, and were a producer on factual entertainment shows such as The Word, Naked City, The Big Breakfast, Eurotrash and many more.

Engage with The Home online by moving into virtual residential care, in both the UK and Japan. Download the app to find out more.